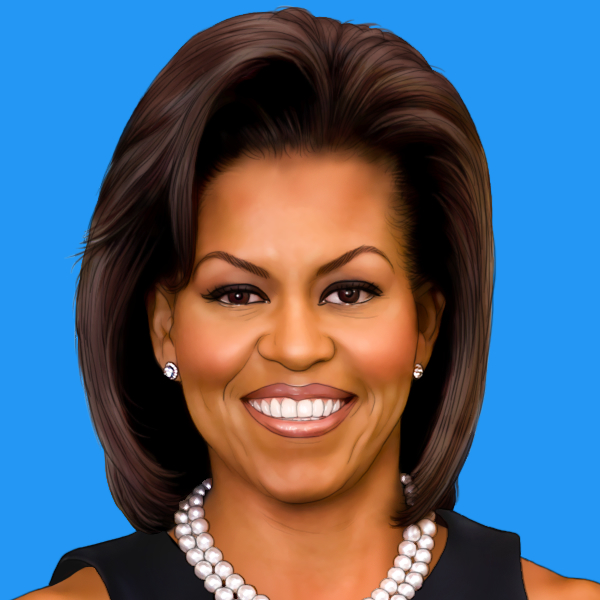 1) Michelle LaVaughn Robinson Obama was born on January 17, 1964 in the state of Illinois in the US.

2) She is a highly educated woman, and has studied at both Princeton and Harvard Law School.

She moved back to her home city Chicago to practice law.

3) She met her husband, Barack Obama, at the law firm where they both worked.

She initially did not want to get involved with a fellow colleague of the firm, but Barack was insistent.

4) As First Lady to the United States, wife of the President, and mother of two daughters, Michelle is a strong advocate for woman’s rights and education.

5) She has supported her husband through all of his political campaigns, and many say that she is the driving force behind his success.

Her support, both at home and in the outside world, have created an image of Michelle as a strong, hard working woman.

Her daughters say they want to be like their mother one day.

Her mother was a homemaker, and her father worked for the city’s water plant.

She has an older brother, who has inspired her throughout her life to follow in his footsteps.

Her family loved to play Monopoly together, and had dinner together every night.

7) Michelle is not only popular amongst political parties and charitable organizations but has become a popular role model and her name is found on many lists too.

In 2006, the Essence magazine found her to be one of the”25 of the World’s Most Inspiring Women.

” The following year, Michele was nominated as one of the “10 of the World’s Best Dressed People” by the Vanity Fair magazine.

8) She didn’t want to work on her husband’s presidential campaign in the beginning.

She was afraid of what kind of effect it would have on her two daughters.

Michelle and her husband made an agreement that she would support his campaign and be on his side only if he agreed to stop smoking.

9) She began to become more involved in her husband’s presidential campaign and worked hard to support him with every chance she had.

She wrote her own speeches for the campaigns and would try to speak without using any notes.

10) When she was asked what she liked most about the presidential campaign and her new responsibilities, Michelle took her time to answer.

A true homemaker at heart, she answered that she loved visiting people and different houses; it gave her ideas and tips about decorating.

11) She is a Protestant Christian, and was raised as a Methodist.

The Obama family previously attended the Trinity United Church of Christ, but after issues with the Reverend, they decided to no longer be a part of the church.

The family sticks together, and if anyone’s views are challenged, Michelle will not take it.

12) Like any marriage, the Obama’s have had their ups and down.

During the campaigning, family life and work life became intertwined, and their family life began to suffer considerably.

The couple was so busy with the campaign and then the presidency, that they had little time for each other.

However, Michelle was not going to give up, and the couple managed to put aside specific nights that they would spend together as ‘date nights’.

When she decides to do something, she sees the entire process through.

That is how she managed to balance the campaigning process and her home life.

Her family was her number one priority, but she worked hard for the campaign.

She made a compromise with herself, that she would spend two days a week campaigning.

14) In the beginning of the first presidential campaign of the Obama’s, the media had labeled Michelle as a hard woman with a very serious attitude.

She did not let this dismay her, and replied wisely by stating that she has received a lot of negative media throughout the years, and nothing can bother her now.

She also said that this was expected, and she has never regretted her decision to join her husband’s campaign.

15) As First Lady, Michelle has many responsibilities.

Nevertheless, she has been able to manage everything very successfully.

She is not afraid to ask for help, and has taken advice from previous first ladies on how to raise a child in such an environment, particularly in the White House.

She asked her mother as well to come stay with the girls to help give them a more stable and comfortable home environment.

16) Due to the high level of negative media about Michelle’s ‘angry’ personality, she began to find ways to improve.

She decided not to wear designer outfits all the time, and rather try to attract people to her by being more like them.

She began to find outlets on television and in magazines where should could appear as ‘just another woman’, and connect to the typical American woman.

17) Being a role model for the entire United States nation, Michelle has found time to actively participate in many organizations that are helping the people of America.

She supports military families and the LGBT groups.

She has given many talks and worked on programs which are aimed at helping working women balance work life and family.

She is also a strong supporter of the arts and art education.

18) Michelle always finds a way to improve on her own or other’s work.

Michelle took things one step forward, and created the White House Kitchen Garden, which is an organic vegetable garden.

This is the first time since Eleanor Roosevelt that the White House has a garden.

19) Michelle announced the winner of an Oscar during the Academy Awards of 2013.

This was the first time a First Lady was on stage at the Academy Awards to announce a winner of an award.

20) Even though Michelle has become a celebrity of sorts among the United States nation, she is at heart a mother.

At the same time, her daughters now aged 12 and 15, have become accustomed to the life of the White House.

They clearly understand what their parents are doing, and are strong supporters of their father.

Send this to a friend